In my previous projects I tried to capture my relation to death and grief through individual and collective narratives, and the longing for leaving a reminder of us behind in personal and in historical scale. In this exhibition I capsuled a vivid, all consuming feeling of fear of death in a life changing moment. After my child was born, besides the enormous joy I experienced fears I never did before. What if I die? Someone is depending on me. What if my child dies? I’m not less dependent on her. And I also mourned my past life, and my alternate futures. In the exhibition I aimed to present my thoughts and emotions, but clearing out the background and appearance of myself to feel my connectedness in an all human experience of grief.

With the exhibition All is disappearing, Sári Ember offers a meditation on the fear of death. A life-sized figure in dark clay is laid out on a central platform in the room surrounded by vessels and reliefs. The arrangement suggests a burial, with the silhouette of a person laying surrounded by items that could be their belongings and everyday objects, or perhaps ritual elements. While from a distance the dark material appears as a bodiless shadow, the clay itself implies the weight and heaviness of a body. Embedded in the material is the idea of clay as flesh, of: “earth to earth, ashes to ashes, dust to dust.” That phrase from a Christian prayer reflects the idea of people being made of earth and, in death, returning to earth, a notion which has appeared in many religions and cultures.
The color black recalls mourning and solemnity in the Western tradition, but the metal oxides and glazes Ember uses in the firing process produce a rich surface that overflows with a rainbow of colors. Like dark mother-of-pearl, the surfaces change depending on how you look at them. It is darkness itself which is suggested.
Dyed silk backgrounds in mottled blue and white, like a cloudy sky, on the central pedestal and in the alcoves of the two walled doors offset the earthy pieces and offer a much-needed airiness. The textiles open new interpretations: the scene is not the archeological excavation of a burial anymore, but a museum display of one.
Arranged on the wall, Ember has painted and engraved ceramic slabs with symbolic scenes of a life. Many of them reference the prone central silhouette, whose laying position repeats in these scenes to different effect: from rigid and lifeless poses to contemplative lounging. In one relief, two figures are propped up on their elbows around a fire. Dangerously close to the fire, they turn to each other but can only see the huge flames.
On the opposite side of the room, a bathing figure on a pitcher and a tearful figure on a bowl are suspended on chains in the arches. Motifs of cleansing have a double nature. If bathing is an external cleansing, tears can be seen as an internal cleansing. Either can be elevated ritual or quotidian moment—just as catharsis in the process of mourning can be a mixture of both.
While the central pedestal is prepared with the armature of a burial, who or what is being mourned is not named. Unrooted from specifics, the installation is open to whatever losses or fears the viewer might bring to it. In this liminal space of death and life, individual fears, pain, and shadows–as well as collective losses–can exist. 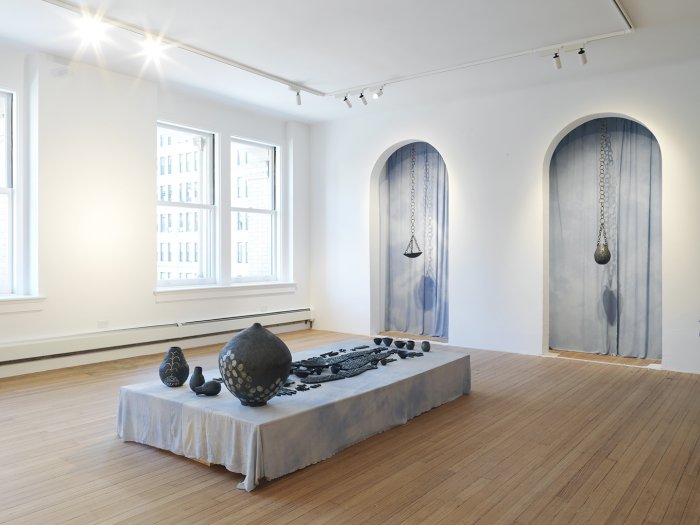 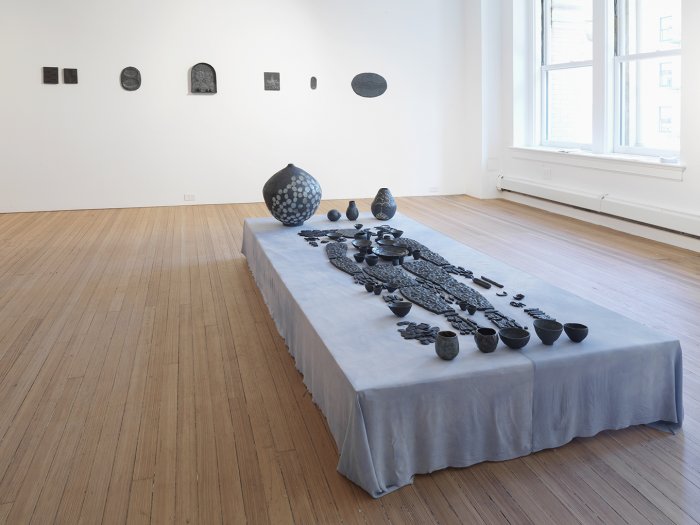 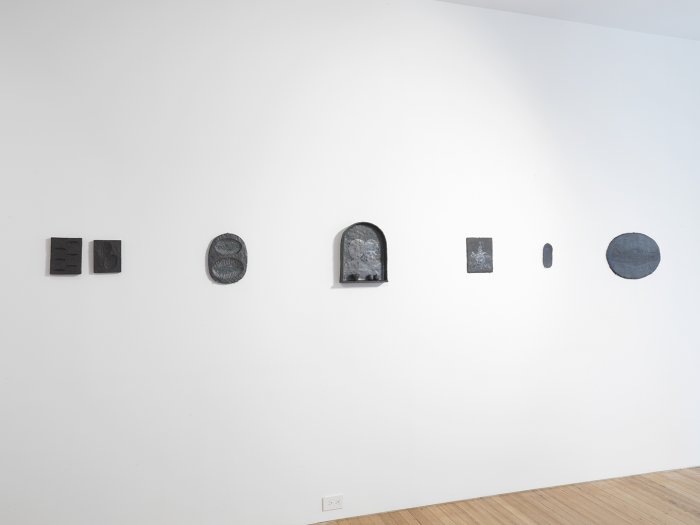 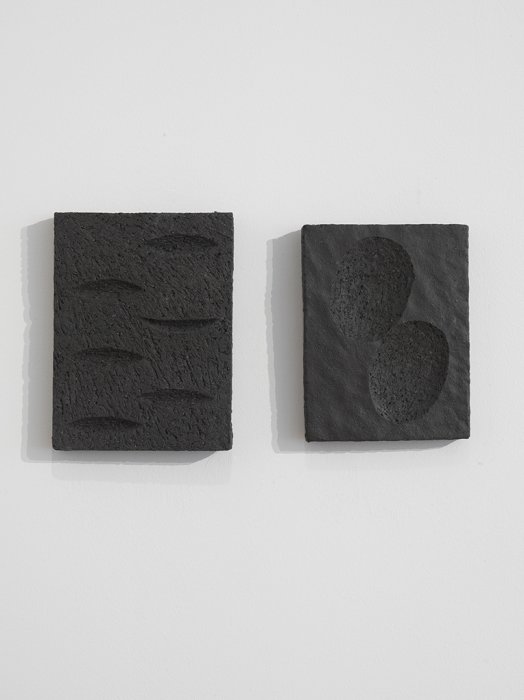 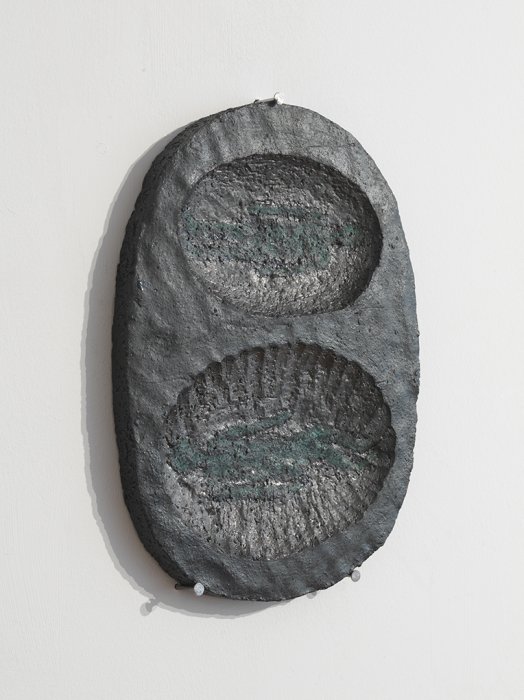 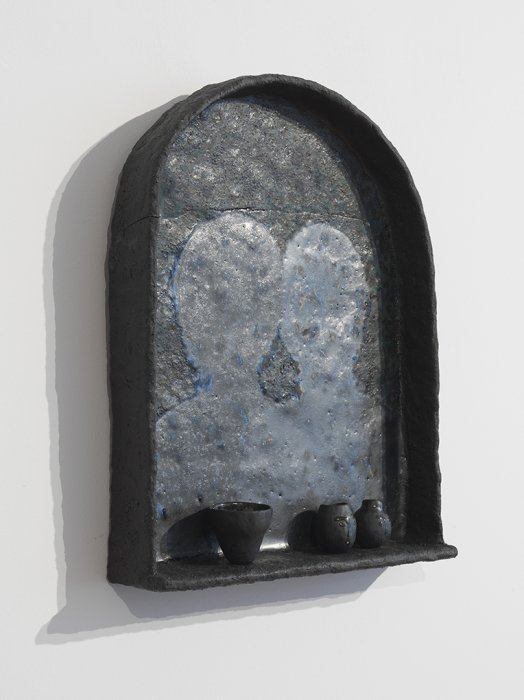 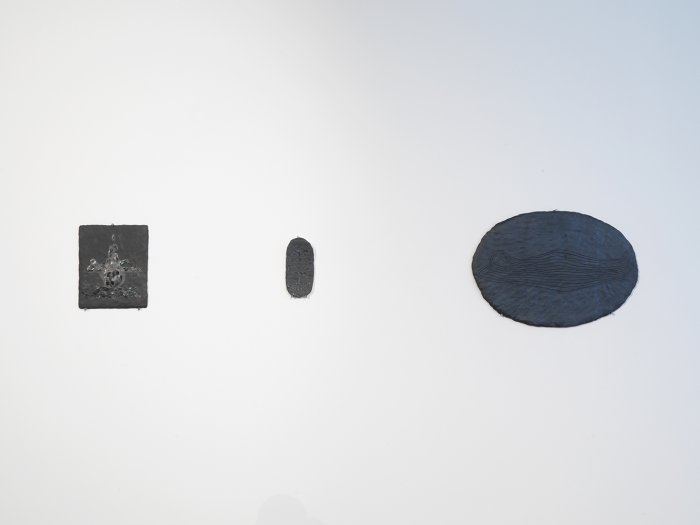 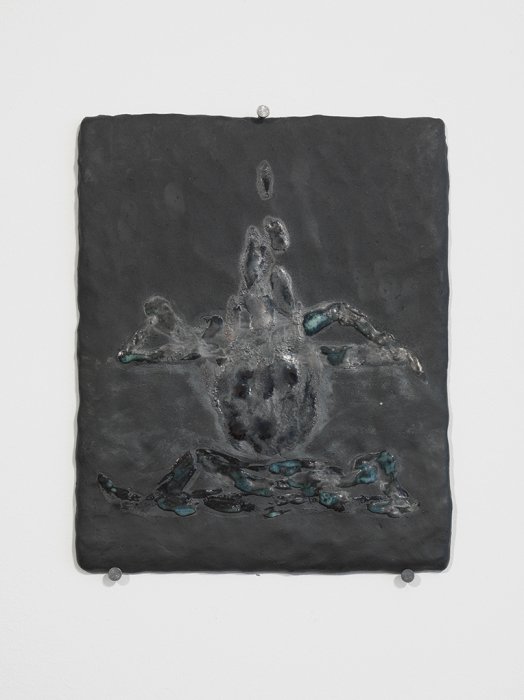 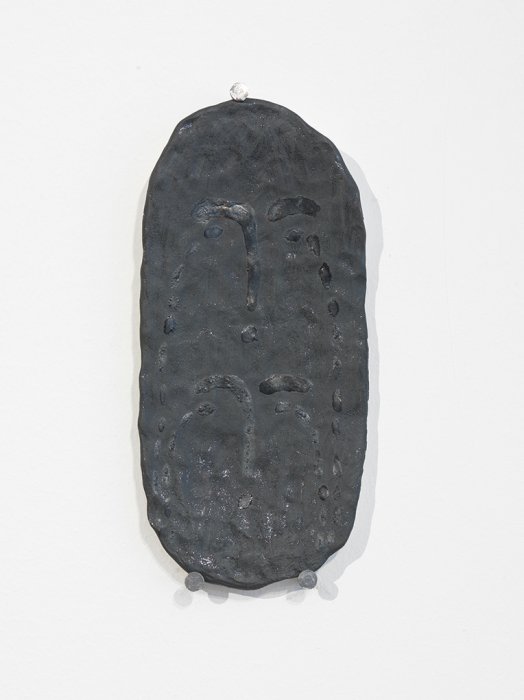 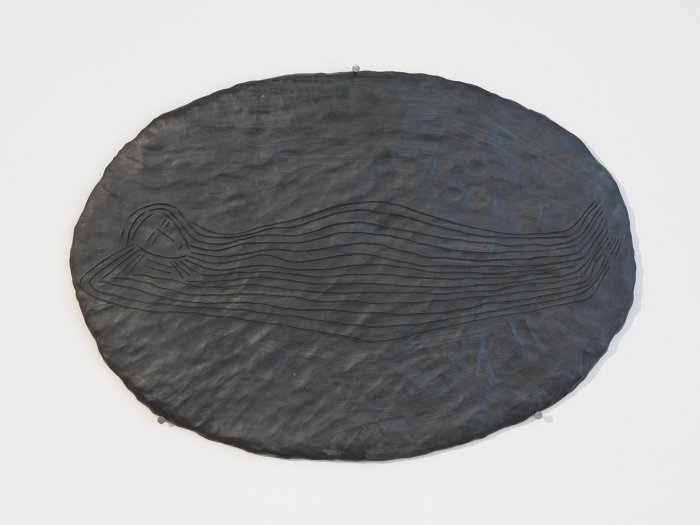 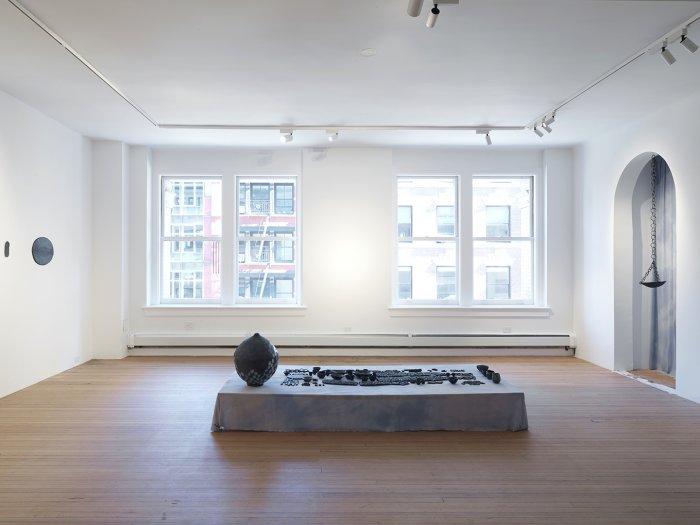 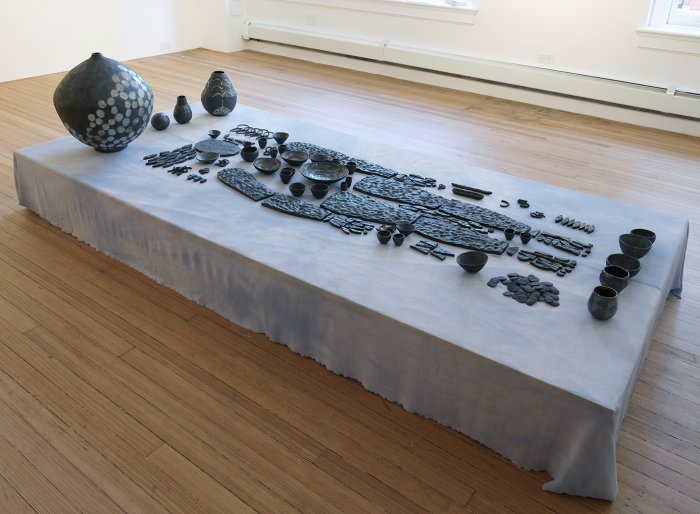 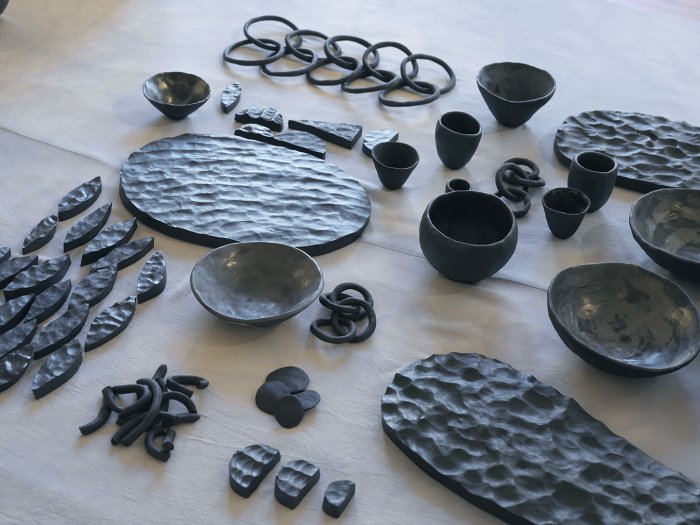 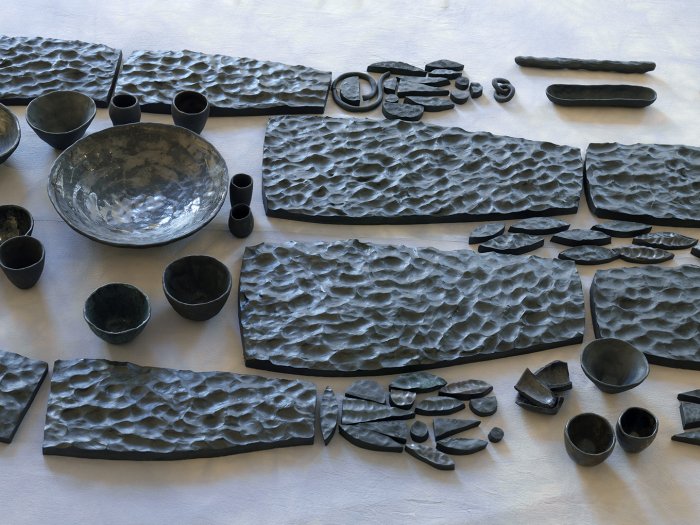 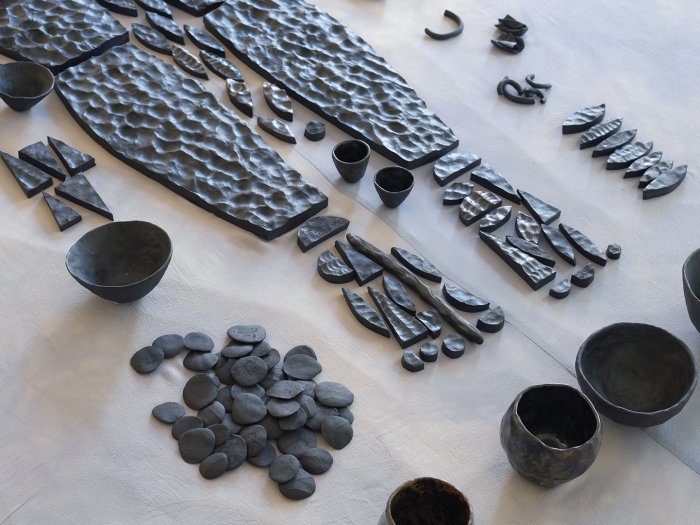 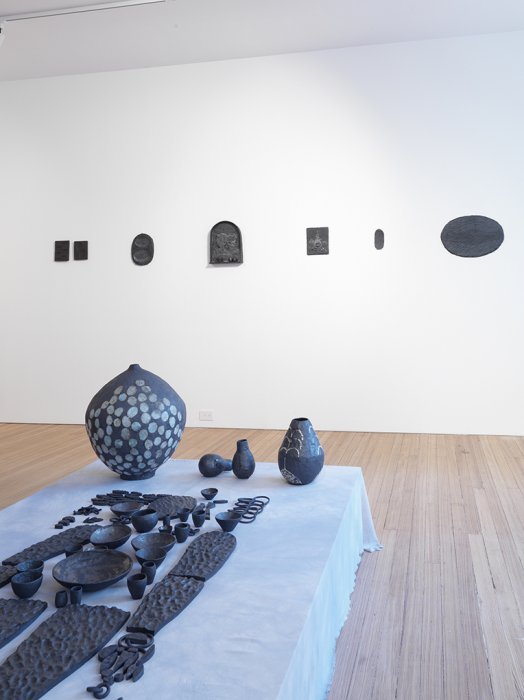 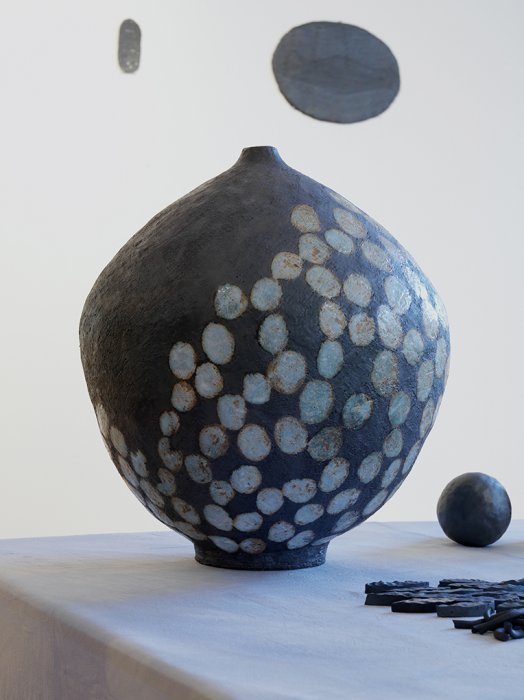 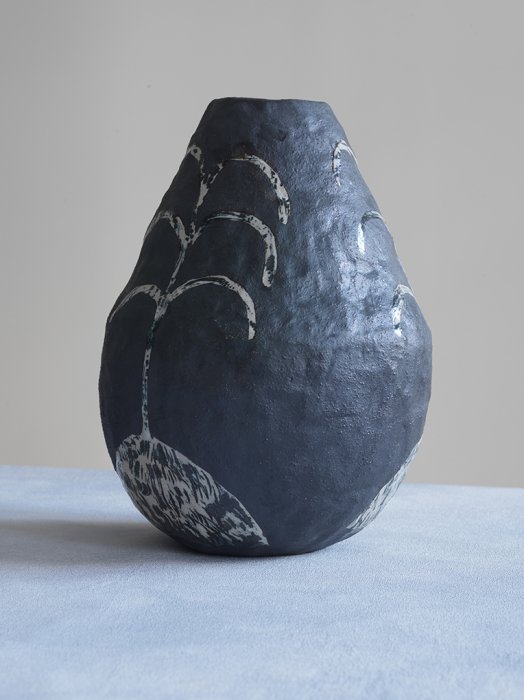 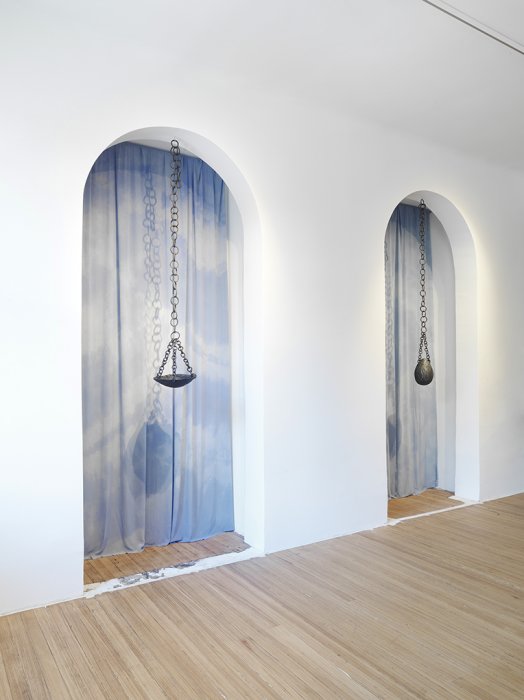 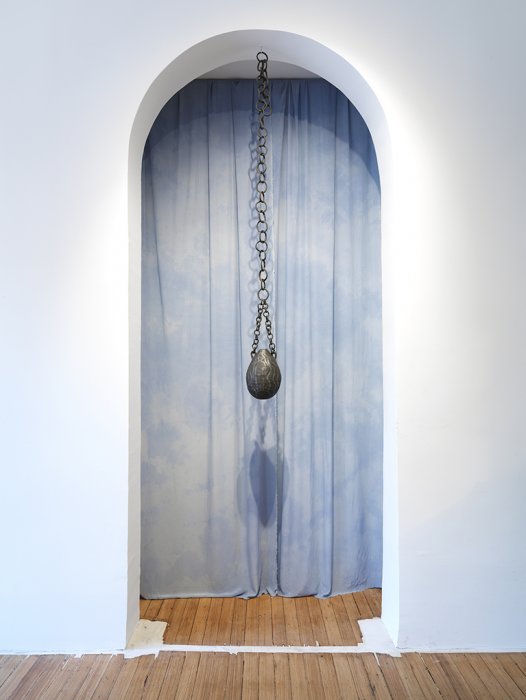 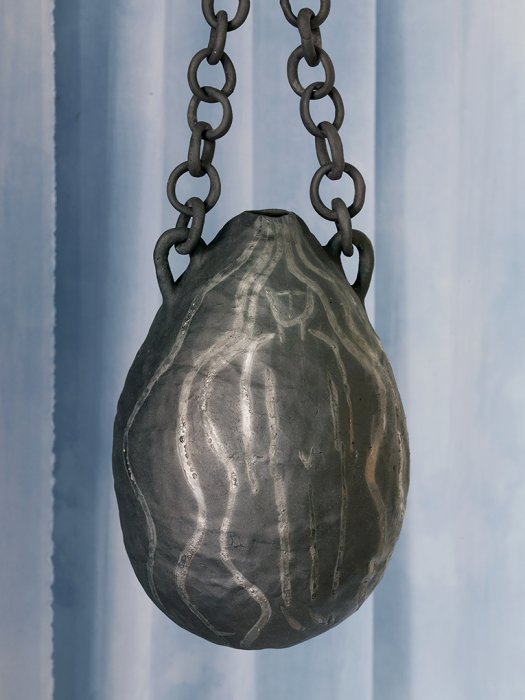 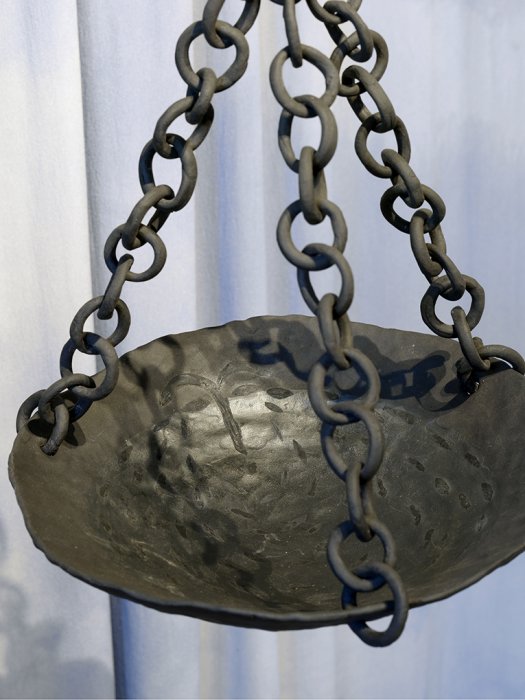